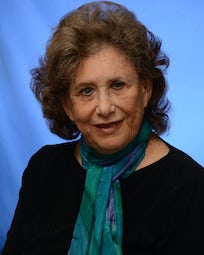 Born in Montevideo, Uruguay.  Two children and 6 grandchildren.   Has a B.A. in Linguistic and a Ph.D. in Environmental Education.

Was Assistant Professor at the University of the Republic, Uruguay, and for many years worked as a translator in UNEP (United Nations Environmental Program) and United Nations Center for Human Settlement, (Habitat) among others, in Nairobi, Kenya and in Montevideo, Uruguay.

Was President of CEFIDU, the Jewish Women Umbrella organization in Uruguay and member of the Committee for the follow up of Democracy, Equity and Citizenship, the Uruguayan Women´s Umbrella Organization.
Member of the National Family Council (Ministry of Education) representing the Jewish Community
Member of the Committee of Jews and Christians in Uruguay, and Advisor to the International Women’s Council of Jews and Christians.
One of the founders and Vice President of "Harambe", the first B´nai B´rith Lodge in Nairobi, Kenya.

Has actively participated in various World Conferences, including UN Women Conference in Nairobi (1985) and in Beijing (1995), as well as Beijing +5, +10, and +15 in New York,, UN Environment Conference (ECO 92) in Rio de Janeiro, UN Conference on Sustainable Development, in Johannesburg, among others, and since 1995 attends annually the meeting of U.N. Committee on Status of Women in New York. Has lived many years in Lima, Peru and in Nairobi, Kenya.