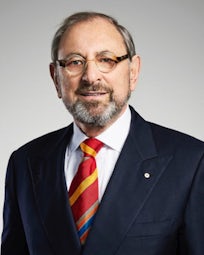 Mr. Goot has had a very active involvement in the formulation and implementation of WJC policy including through its Resolutions Committee and the Strategic Policy Review undertaken by WJC staff following the decision of the Executive Committee in 2019.

He also currently serves as Deputy President of the Executive Council of Australian Jewry (ECAJ), the elected representative organization of the Australian Jewish community, having been ECAJ President from 2007 to 2010 and from 2014 to 2018. In addition, he is currently active as an Hon. Life Member of the New South Wales Jewish Board of Deputies (since 1986) and a Life Patron and Chairman of Trustees of Moriah College (since 1999) and for many years has been an actively involved in the Conference on Jewish Material Claims Against Germany, where he is currently a member of the Board of Directors and a member of the Allocations Committee.

In 1988 he was awarded Membership of the Order of Australia for services to the Jewish Community.

In 1994 he was awarded the Jewish Community Services: Communal Leadership Award and Outstanding Jew Award.

In January 2020 he was decorated as an ‘Officer of the Order of Australia’ for distinguished service to the Jewish community through executive roles with educational, cultural and social welfare bodies.

Mr. Goot is a barrister practicing at the New South Wales Bar and was appointed as Senior Counsel in 2000.