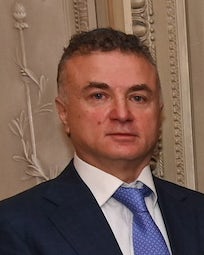 Mr. Michael Mirilashvili was born in Kulashi, Georgia, in 1960. He studied at St. Petersburg Medical School in Russia and graduated as a pediatrician in 1983. As the communist regime collapsed, he entered the world of business and in the overtime his activities developed around the globe. Today his interests include numerous hi-tech companies, as well as centers of development, maintenance and management of commercial and office real estate.

In the course of his lifetime and as soon as it became possible, Mr. Mirilashvili has been devoting his time and resources to broad philanthropic activities for the Jewish people and the State of Israel. He contributes a lot to the strengthening of Jewish communities in the CIS countries and makes generous donations to the restoration of synagogues and communal institutions. He supports connections between the Jewish communities and the State of Israel.

Michael Mirilashvili is conducting wide international philanthropic activities through Keren HaYesod and he gave large donations to a series of national projects in Israel, for instance:  he assisted in the repatriation of Jews from the states where they suffer mistreatment. In the past he was the Chairman of ZAKA. His recent activities include: the sending of a plane with the Israeli physicians and paramedics to help the victims of the terror attack in Burgas, Bulgaria, the creation of the station of fire trucks after “The Carmel Disaster”, the donation of the Torah scrolls to IDF units etc.

Mr. Mirilashvili supports one of the most important projects of the Museum “Yad Vashem” – “The Center of the historical studies on the Soviet Jews in the years of the Holocaust”.

Mr. Mirilashvili is married with two children and five grandchildren.