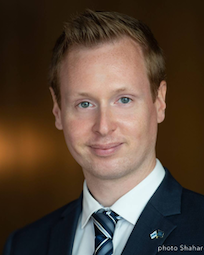 Prior to joining the WJC in 2017, Gabriel was the political adviser at the Embassy of Israel in Sweden and he is a former board member of the Zionist Federation of Sweden. He has published numerous articles in the international media including in The Jerusalem Post, The Times of Israel, and Ynet. Gabriel holds a BA in Physics from New York University.