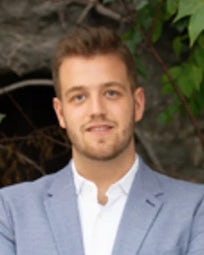 Bini Guttmann was the President of the European Union of Jewish Students, the democratic and peer-led voice of Europe’s 160.000 young Jews between 18 and 35. He advocates for young European Jewry’s interests at EU-Institutions, the OSCE, and the UN. As a European Activist, Bini is focused on combatting all forms of antisemitism - guiding European universities on how to support Jewish students, endorsed by the European Commission passing the IHRA definition of antisemitism in Europe’s biggest youth organisation - while standing up for Human Rights. At the same time, he focuses on youth inclusion in Jewish communities, elevating the next generation of Jewish leaders.

As President of the Austrian Union of Jewish Students, Bini made the National Union of Students ban BDS from all campuses while leading the community response against the far-right. Bini is 24 years old and from Vienna, where he studied law and political science.