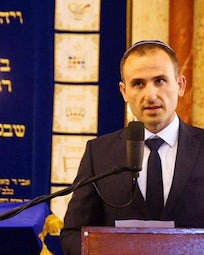 In 2017 he was awarded by the mayor of Sofia with the "Badge of Sofia", for his active public and social activity and medical dedication.

In 2019 Assoc. Prof. Oscar was awarded with the highest State Order for Civil Merit First Degree for merits in the development of civil society, the protection of human rights and freedoms and the strengthening of democratic institutions in Bulgaria.

He developed welfare programs in benefit of the Bulgarian Jewish community members as well as the general Bulgarian society. One of his most praised charity initiatives – the “Do Good”, started back in 2012, where over 30,000 children have been examined for free over the past 7 years and more than 1,000 glasses have been donated.

Assoc.Prof. Oscar is also the basis of the joint initiative between the Organization of the Jews in Bulgaria “Shalom”, the Bulgarian Medical Association and the Bulgarian Society for Ophthalmology - “Together we will make it” which took place during the coronavirus lockdown. Thanks to their joint efforts, nearly hundreds families of medics under quarantine from across the country have been supported.

He is married to Karina Oscar, a marketing executive. Together, they have two children, Avi and Noa.