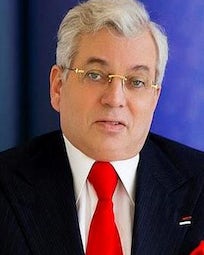 Aaron G. Frenkel is an international philanthropist, visionary entrepreneur with a passionate commitment to Israel and the Jewish people, and Chairman of the EuroAsian Jewish Congress.

Since the 1980’s, he has established and owned the Loyd’s group of Companies, which has been involved in investments In real estate, civil aviation and aerospace, energy and high tech. The Loyd’s Group was formed as part of the project on the development of the economies of Central & Eastern Europe and The F.S.U countries. Development was focused on the delivery of know- how, technologies ,equipment and capital from international corporations. Aaron G. Frenkel , through his Loyd’s Group, has carried out and continues to implement a huge number of joint projects for the delivery and modernization of advanced equipment and technologies for civil aviation in these countries.

The leading role he has assumed in the aviation industry is inextricably linked to his efforts on behalf of the Jewish people. In the 1980’s just prior to fall of the Iron Curtain and the disintegration of the Soviet Union, the Jewish Agency sought Frenkel’s assistance in helping airlift Jews out of country. The effort prompted his involvement in the founding of Russian Airlines, which got its start flying Soviet immigrants to Israel. Today Frenkel is considered one of the most influential and successful entrepreneurs in the region that used to be the Soviet Union,” The Jerusalem Post noted”.

He has been awarded wide recognition for his business and philanthropies accomplishment:

The French Legion De Honneur which was awarded by the French President.
Chevalier De L’order De Grimaldi Medal Of Honour presented by Prince of Monaco, Albert II.
The Chairman of The President Conference at the tenore of  President Shimon Peres.
Member of the Board of Trustees of Tel Aviv Museum of Fine Arts.
Honorary Consul of The Republic of Croatia In Jerusalem.
President of the Jewish Community of Monaco.
Member of The Board of Governers of Beit Hatfuzot.
Recipiant of“ Yakir Keren Hayesod” Award for his contribution To Israel.

He is married to Maja Ruth Frenkel, with whom they bring up five children.