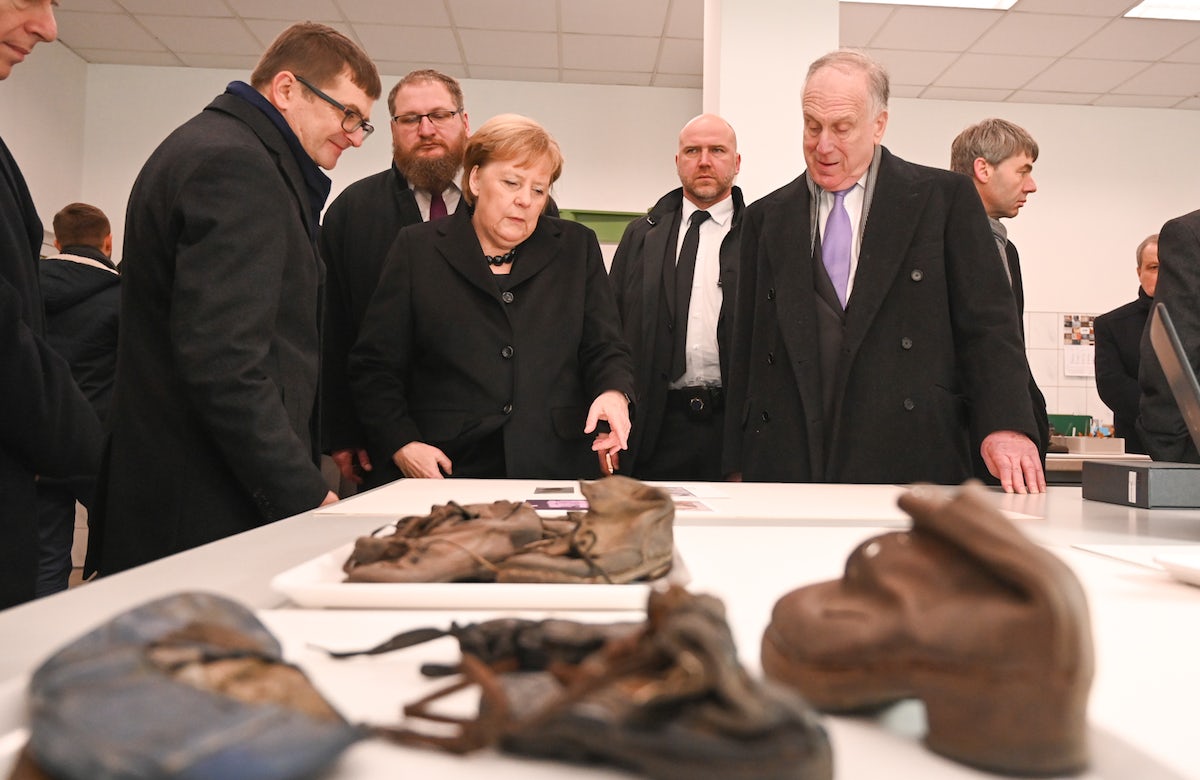 Ahead of the 75th anniversary of the liberation of Auschwitz-Birkenau, Chancellor Merkel visits the Memorial for the first time, announces € 60 million commitment

OSWIECIM (Poland) – World Jewish Congress President Ronald S. Lauder today met German Chancellor Angela Merkel at the site of the former Auschwitz-Birkenau concentration and extermination camp and thanked her for announcing that Germany is committing € 60 million to the Auschwitz-Birkenau Foundation to support preservation of the memorial site. Her visit is the first in her 14-year tenure as Chancellor of Germany, the first time a German chancellor has visited the site since 1977, and the third time a German chancellor/head of government has visited since World War II. The visit comes in advance of the commemoration of the 75th anniversary of the liberation of Auschwitz-Birkenau and amid rising levels of antisemitism in Europe and around the world.

Chancellor Merkel entered through the camp’s notorious gate marked “Arbeit Macht Frei” (Work Sets You Free), and lit a candle in memory of the more than 1.1 million people killed there. She was accompanied by Polish Prime Minister Mateusz Morawiecki; Piotr M.A. Cywinski, Director of the Auschwitz-Birkenau State Museum and President of the Auschwitz-Birkenau Foundation; and Dr. Josef Schuster, head of the Central Council of Jews in Germany.

WJC President Lauder accompanied Chancellor Merkel during her visit at the museum’s Conservation Laboratories, which preserve every shoe, every document, and every building that remain at the site. Amb. Lauder has been involved in the preservation of the Auschwitz-Birkenau site for decades, raising tens of millions of dollars internationally to fund conservation efforts, including the establishment in 2003 of the laboratories. Chancellor Merkel also visited the Central Sauna building at the former Birkenau camp, where prisoners were subjected to “disinfection” before being forced into slave labor. 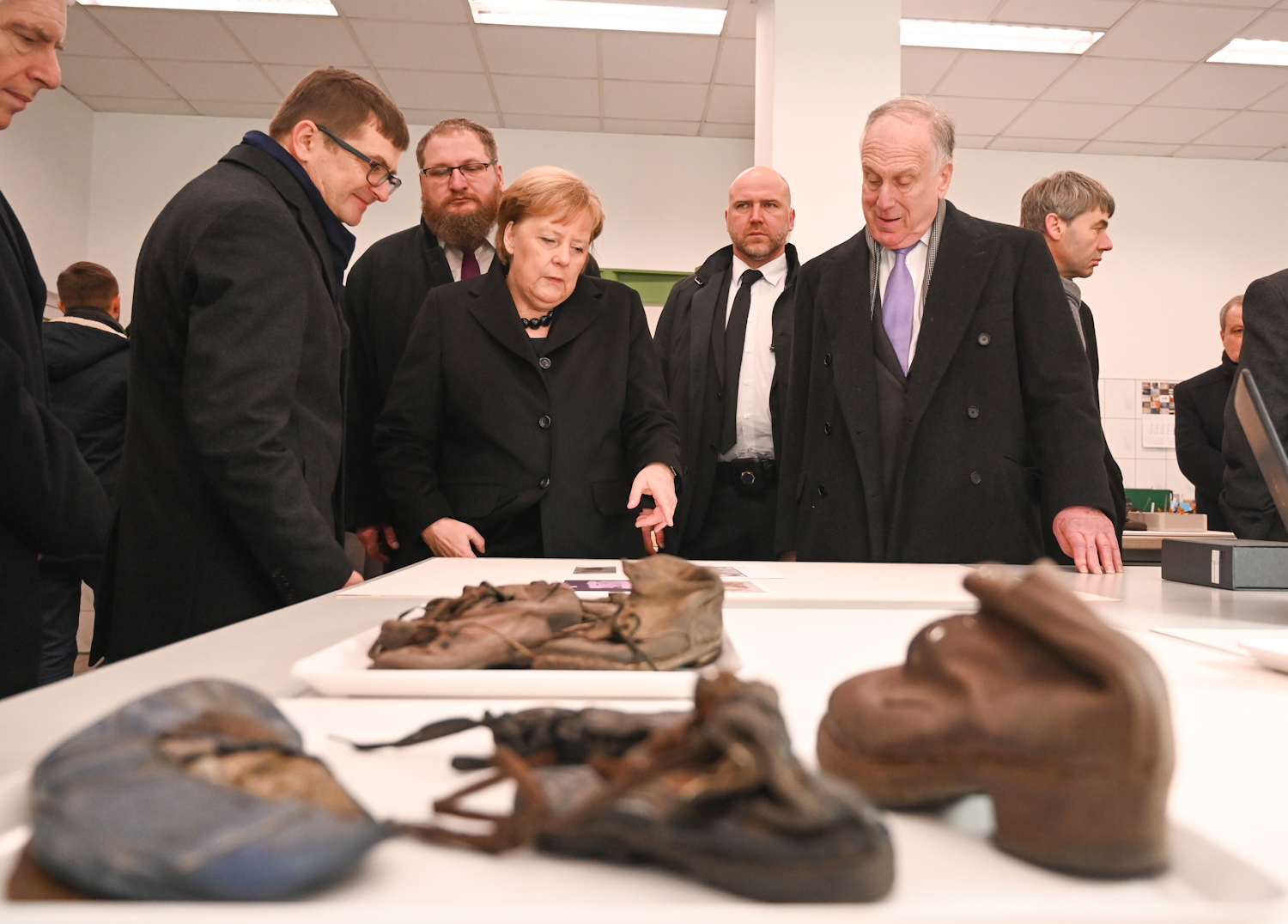 “Antisemitism remains a vile, pervasive and resurgent force in the world today, making Holocaust education more vital than ever,” said WJC President Lauder. “Chancellor Merkel has been a valued and reliable ally in the fight against this oldest of hatreds. Preserving and conserving the remains of the Holocaust are critical to maintaining an accurate record of the atrocities committed, especially as the number of living, first-hand witnesses inevitably dwindles. Only by knowing the past can we protect our future, and we are deeply grateful to Chancellor Merkel for her commitment to the preservation of the site where almost 1 million Jews were brutally murdered by the Nazis only and exclusively because they were Jews.”

Chancellor Merkel acknowledged the conservation work and thanked “that care was taken with great commitment so the site can bear testimony”. Merkel stated: “This history has to be told, again and again.”

In her remarks at the Central Sauna, Chancellor Merkel said of Auschwitz-Birkenau, “It was a German extermination camp operated by Germans. I place value on stressing this fact. It is important that we clearly identify the perpetrators. We Germans owe this to the victims, and we owe it to our ourselves. To keep alive the memory of the crimes committed, to identify the perpetrators and to commemorate the victims in a dignified manner, that is our enduring responsibility. It is not open to any negotiation, and is and will forever be an integral part of our country.”

She added, “Once again, Jewish life is flourishing in Germany. We are linked to Israel through manifold and friendly ties, that is anything but to be taken for granted. It is a great gift, akin to a miracle, but it cannot undo the horrors that happened, it cannot bring back to life the Jews that were murdered. There will forever be an empty space in our society.”

In October 2019, the World Jewish Congress honored Chancellor Merkel with the WJC Theodor Herzl Award for her efforts to protect and foster Jewish life in Germany and her support for Israel.

The Auschwitz-Birkenau site is one of the most important remaining physical remnants of the Holocaust and a crucial reminder of the evil that can stem from bigotry and hatred. Chancellor Merkel’s visit to the Auschwitz-Birkenau Memorial comes at a time when antisemitism and white nationalism are on the rise across Europe and the United States, and global understanding of the Holocaust is on the decline. In the United States today, 41% of adults cannot identify what Auschwitz was or is, and 11% of adults – and over one-fifth of millennials – have not heard, or are not sure if they have heard, of the Holocaust.

The WJC and Amb. Lauder are preparing to return to the Auschwitz-Birkenau Memorial on January 27, 2020, International Holocaust Remembrance Day, for the commemoration of the 75th anniversary of the liberation of Auschwitz-Birkenau. Amb. Lauder will join close to 200 survivors as well as heads of state and representatives of Jewish communities from around the world to mark the anniversary.

In the lead-up to International Holocaust Remembrance Day, the WJC will also launch its fourth annual global #WeRemember campaign aimed at promoting education about the horrors of the Holocaust.