Stay-at-home orders and the inability to travel were no deterrent for the World Jewish Congress in convening its semi-annual Executive Committee meeting. For the first time in its history, the WJC brought together its leadership committee virtually, with 60 representatives of Jewish communities from 28 countries “in attendance.” The occasion also marked the “bar mitzvah” year of Amb. Ronald S. Lauder’s leadership at the helm of the organization; he was elected as President of the WJC in June 2007.

WJC President Lauder opened the meeting by conveying heartfelt wishes to WJC Honorary Vice President Rabbi Arthur Schneier on the occasion of his 90th birthday. Amb. Lauder noted that today, no one has had as long an affiliation with the WJC as Rabbi Schneier, dating back as it does to before the time of Mr. Lauder’s predecessor at the WJC, the late Edgar M. Bronfman.

In recapping significant WJC activities since the last meeting of the Executive Committee in Munich in October 2019, Amb.  Lauder noted the WJC Herzl Award Dinner in New York honoring former U.S. ambassador to the United Nations Nikki Haley, and his address at the Pontifical Gregorian University in Rome, both in November; his visit in December to the former German Nazi concentration and extermination camp Auschwitz-Birkenau and its Conservation Laboratories with German Chancellor Angela Merkel, the first time Chancellor Merkel had been to the site; and the commemoration ceremony of the 75th Anniversary of the Liberation of Auschwitz-Birkenau on January 27, 2020, at which he delivered the keynote address. Amb. Lauder said that this gathering was especially poignant for many survivors because “it was the first time they had returned to the camp and it afforded them the chance to say goodbye to the families they had lost.”

WJC Treasurer Chella Safra reported on the organization’s finances in the context of the Covid-19 pandemic. The business session of the meeting was chaired by WJC Steering Committee member Robert Goot.

Israel’s new Minister of Diaspora Affairs, Omer Yankelevitch, addressed the Executive Committee members, noting that she was pleased to partner with the WJC on pursuing shared goals. 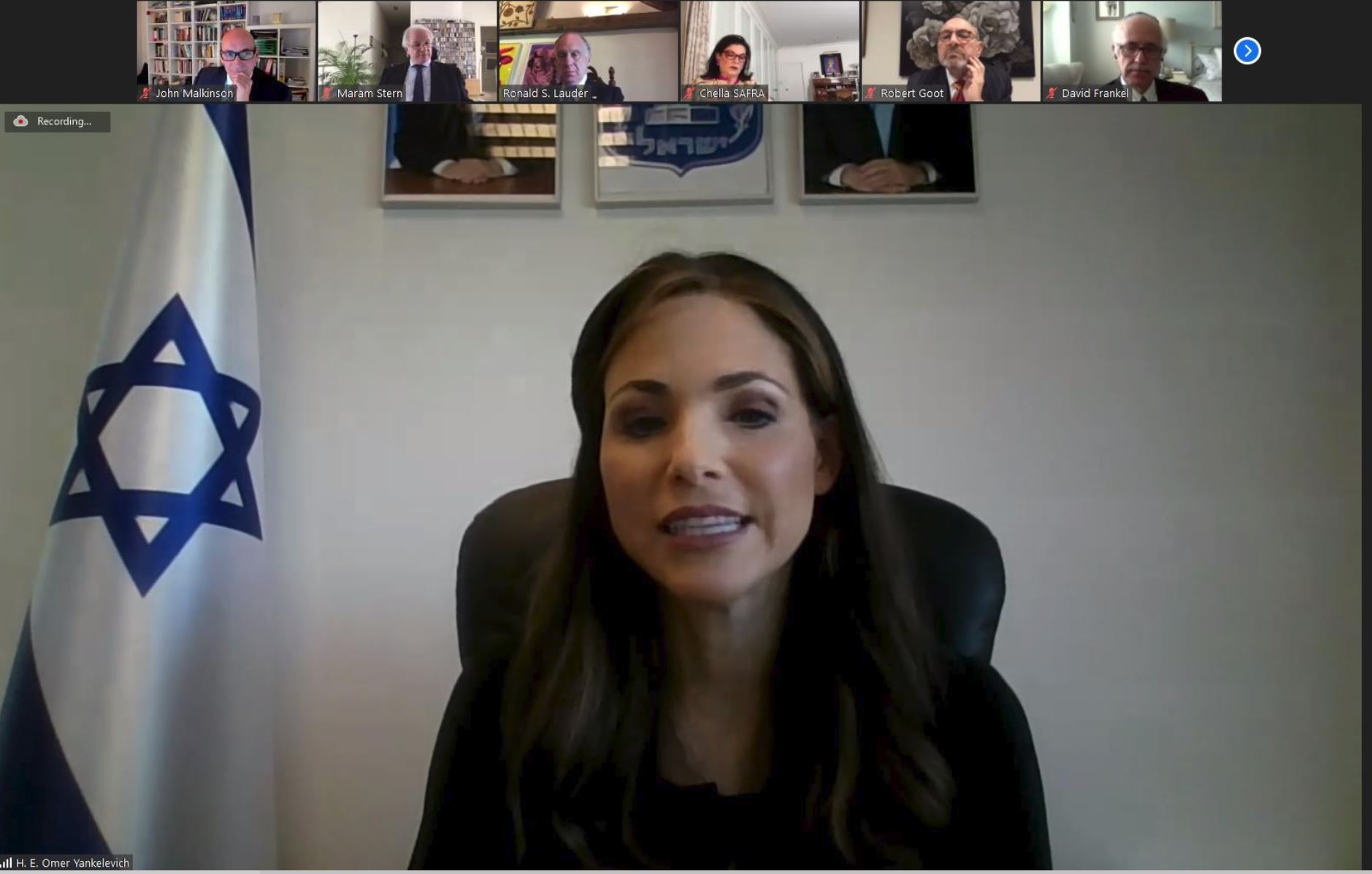 “I recognize and appreciate the outstanding contributions the WJC has made for so many years. I am looking forward to working with communities to build stronger ties between Jews in Israel and Jews all over the world,” Minister Yankelevich [pictured] said, adding that everyone’s resilience has been tested by the coronavirus pandemic, but also that a feeling of mutual responsibility had emerged as a result. She said that she hoped the momentum gained from that development would not be lost, and that, “In the end we are all Jews and we need to work together.” She also called on the members of the Executive Committee to combat the evils of antisemitism, which must be a priority, and to safeguard the wellbeing of Jews everywhere. This, she said, was a historical moment in which to solidify the ties between Israeli and Diaspora Jews, and she added that she welcomed suggestions for joint initiatives. “We must focus on what we have in common: history, legacy, destiny.”

The discussion focused on the challenges faced by Jewish communities around the world during the COVID-19 pandemic and what lies ahead in the post-crisis world. Participants discussed how the pandemic has precipitated social unrest, economic hardship, and an increase in antisemitism in the form of conspiracy myths directed at Jews. Amb. Lauder noted the WJC’s efforts to work with local authorities to mitigate the uptick in manifestations of such antisemitism.

Latin American Jewish Congress President Adrian Werthein related a moving account of how the Sao Paulo Jewish community was able to help arrange a Jewish burial for a tourist who had died of coronavirus, who otherwise would not have been interred in the traditional way.

Many of the participants expressed their gratitude to the WJC for the moral and material assistance extended to their communities during this difficult time. WJC Vice President Mary Kluk who heads the South African Jewish Board of Deputies and the Africa & Australia Jewish Congress spoke warmly of the WJC, noting, “The WJC is the voice and home of global Jewry and we feel held together and kept connected in a way that is really important.” She added that her community derives comfort and chizuk [strength], knowing that the WJC is by their side.

The Executive Committee of the World Jewish Congress conducts the affairs of the WJC in accordance with the decisions of the Plenary Assembly and Governing Board. The body consists of the WJC President, Vice Presidents (including, ex Officio, the presidents of the 12 largest WJC-affiliated Jewish communities, as well as representatives of other Jewish communities, international Jewish organizations, and young adults), the Governing Board Chairman, the Treasurer, the Chair and Co-Chair of the Policy Council and the Chairmen of the Regional Affiliates. The Executive meets at least twice a year.