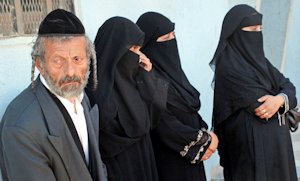 A leading member of Yemen's dwindling Jewish community was stabbed to death in the capital Sana'a by a Muslim who accused him of witchcraft, the wounded man's son told AFP. Harun Yusuf Zindani, 50, "was stabbed at Saawan market near the US Embassy in northeast Sana'a," his son Yehya said. He received stab wounds to his neck and stomach and later died in hospital. Yehya said the attacker was a "well-known person who says my father has ruined and bewitched him."

A source involved in efforts to bring Yemenite Jews to Israel told the news service ‘Ynet’ on Tuesday that the members of the Jewish community in Yemen "are living in fear ever since the uprisings of the Arab Spring."

In 1948, Yemen's Jewish community numbered some 60,000. But in the three years following the creation of the Jewish state that year, more than 48,000 were taken to Israel in a secret operation known as ‘Magic Carpet’.

The community continued to dwindle in subsequent decades and by the early 1990s it numbered only around 1,000 people. The lifting of a longstanding travel ban in 1993 sparked a fresh exodus. Less 200 Jews remain in Yemen today.

Zindani hailed from the northern province of Saada where Zaidi Shiite rebels fought a bloody war against the regime of former strongman Ali Abdullah Saleh. He had settled in Israel in the 1990s but returned to Yemen due to absorption hardships.

In 2008, Moshe Yaish-Nahari, the brother of a prominent rabbi in Yemen, was shot to death. Since the murder of Nahari, who was himself a known figure in the Jewish community, some 100 Jews immigrated to Israel. The remaining members of the community now live in Sana'a in government housing after being evacuated from other areas of Yemen over fear for their safety.

Last weekend, the local chief rabbi called on Yemen’s president to allow the Jewish community and other minority groups to have seats in the country’s parliament. “I demand the government’s new attention to this, to work to allocate seats for members of the community in the Consultative Council and Parliament, in order to feel real citizenship, non-discrimination, a right guaranteed by our law and the Constitution,” said Rabbi Yahia Youssef Moussa in an interview with ‘CNN Arabic’.

Moussa said he had emphasized to the president the importance of the Jewish community to Yemen and that the community would like to serve in the government in order to help its own community and all the people of Yemen.