Israel's Holocaust memorial institution Yad Vashem has rescinded an invitation to Lithuanian officials to attend a memorial service in protest against Lithuanian calls to investigate a Holocaust survivor. The decision follows accusations in Lithuania against Joseph Melamed, 86, who is being accused of “slandering” Lithuanians who collaborated with the Nazis.

When Lithuania was invaded in 1941, German troops were greeted as liberators from the Communist Soviet Union, and collaboration was rampant. In recent years, Lithuania and others have sought to highlight the activities of nationalist figures who opposed the Soviets - even those suspected of atrocities against Jews. Of the 220,000 Lithuanian Jews before World War II, only a few thousands survived. Many of their murderers were Lithuanians.

It is not the first time Israel has clashed with Lithuania over its treatment of Holocaust survivors. In 2007, Lithuanian authorities launched investigations into the wartime activities of Holocaust survivors and partisans in Lithuania. Among those accused of war crimes was Yitzhak Arad, a former chairman of Yad Vashem. 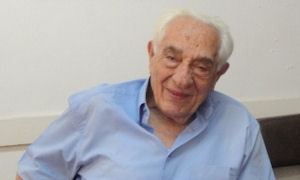 The investigations prompted the Israeli Holocaust memorial institution to publicly express concern over "the atmosphere of anti-Semitism and Holocaust revisionism in Lithuania." The case against Arad was closed in 2008. However, Lithuania recently targeted Melamed, a Shoah survivor and a partisan who fought against the Nazis in the forests. As chairman of the Association of Lithuanian Jews in Israel, Melamed (pictured) provided Lithuanian authorities with documents allegedly implicating thousands of Lithuanians of collaborated with the Nazis and executing Jews and he demanded that they be investigated. The authorities refused and instead asked Israeli police to question Melamed in regards to slandering nine of its national heroes.

In a letter to the ‘Haaretz’ newspaper last week, Lithuania’s ambassador in Tel Aviv, Degatis, wrote that Melamed had not been accused of anything and that prosecutors had merely wished to verify the documents on which he based his accusations. Degatis said that nine of the people accused of genocide were leaders of the post-war Lithuanian resistance against the Soviets and had been "falsely accused of serious crimes."