MUNICH – World Jewish Congress President Ronald S. Lauder on Wednesday thanked the German government for its long-awaited tribute to the 11 Israeli sportsmen and German policeman murdered by Palestinian terrorists in the Olympic Village during the 1972 Munich games, and said: “Today we mark not just a tragedy, but a terrible wrong that took place here 45 years ago. Let me be clear from the start. This monument should not have taken 45 years to build."

At the official inauguration ceremony of the Munich memorial constructed in honor of the victims, presided over by Israeli President Reuven Rivlin, German President Dr. Frank-Walter Steinmeier, and Minister-President of Bavaria Horst Seehofer, WJC President Lauder said: “This monument is not just about Jews. It is about all people. No one anywhere has the moral right to inflict terror on anyone.”

“As president of the World Jewish Congress, I have seen the high price of world silence. World silence led to the Holocaust. We can see the results Just 40 kilometers from here at Dachau. World silence also played a role here in 1972 when Palestinian terrorists slaughtered 11 Israeli athletes and their trainers. They did not just commit murder. They destroyed the peaceful tradition of the Olympics games. 45 years after Munich, we see the world’s silence again, with a resurgence of anti-Semitism throughout Europe.

“What lessons have we learned since 1972? Lesson number one: Appeasement never works. Terror has only increased throughout Europe since Munich. Lesson number two: Stop repeating the lie that one man’s terrorist is another man’s freedom-fighter. Terrorists are not freedom fighters. They are terrorists. They kill innocent human beings. And this is lesson number three: We must stop them together,” WJC President Lauder said.

In dedication of the memorial, German President Steinmeier said: "Part of today is not just commemoration, but an everlasting promise: Only when Jews in Germany feel safe here, feel at home, only then has Germany become whole… Becoming German means to be aware of this history, to understand this history and to accept this history. It holds true for people coming from other cultures too." 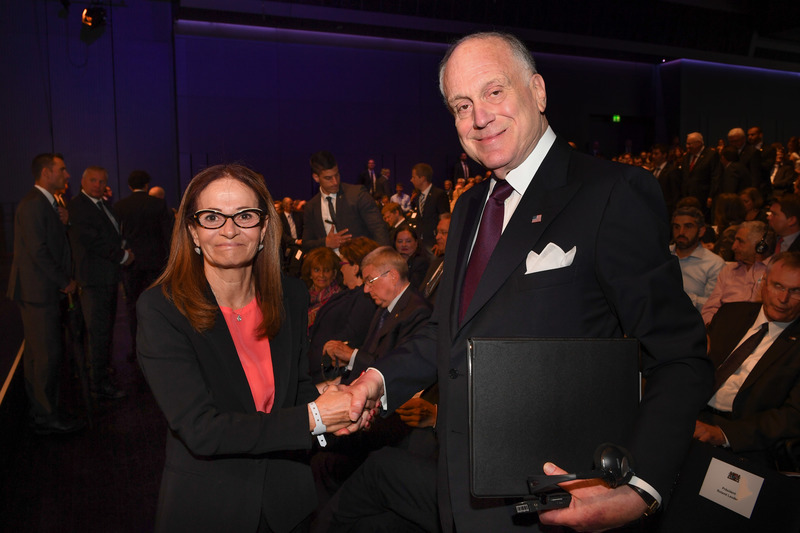 Israeli President Rivlin said: "“We march here together with the dead… we march together with your children, your grandchildren, your relatives, and your fellow Olympic delegation, all those who haven’t forgotten you for a moment… I believe that Israel and Germany have a responsibility to be allies in the uncompromising struggle against terror and find ways to work together to wipe it out… We expect that justice will be served and that a moment of silence will be instated at the opening of the Olympic Games in memory of those murdered.”

The high-level delegation was set to visit the Dachau Concentration Camp Memorial site later that day, in a gesture organized by Dr. Josef Schuster, the president of the Central Council of Jews in Germany (Zentralrat der Juden in Deutschland).