WJC President Lauder: “There is only one Jewish state in the world and it is our solemn duty to make sure it continues to thrive” - World Jewish Congress

WJC President Lauder: “There is only one Jewish state in the world and it is our solemn duty to make sure it continues to thrive” 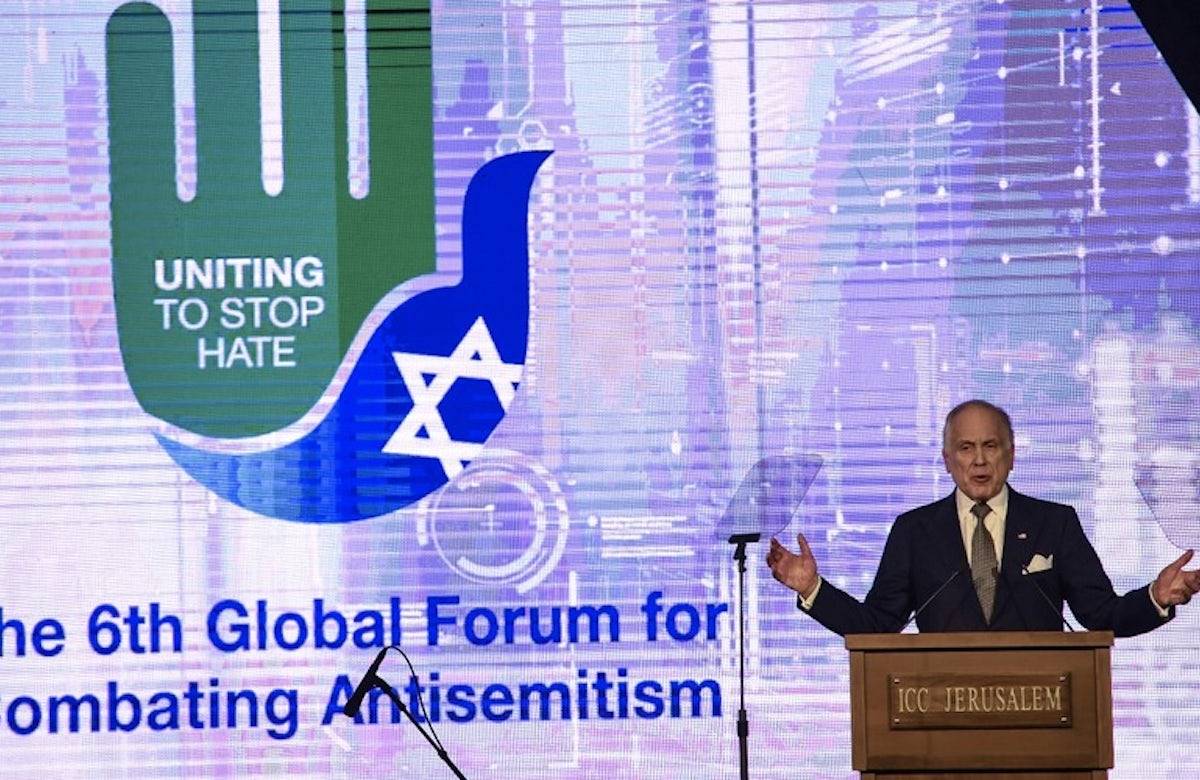 JERUSALEM – The World Jewish Congress hosted a special delegation of 70 Jewish leaders from 40 different countries in Jerusalem this week for a two-day mission under the leadership of President Ronald S. Lauder focused on strengthening Diaspora-Israel relations, as part of a series of events celebrating 70 years of independence for the State of Israel. The mission culminated on Monday evening with the official opening plenary of the 6th Global Forum for Combatting Antisemitism organized by the Israeli Ministry of Foreign Affairs, including a keynote address by President Lauder. 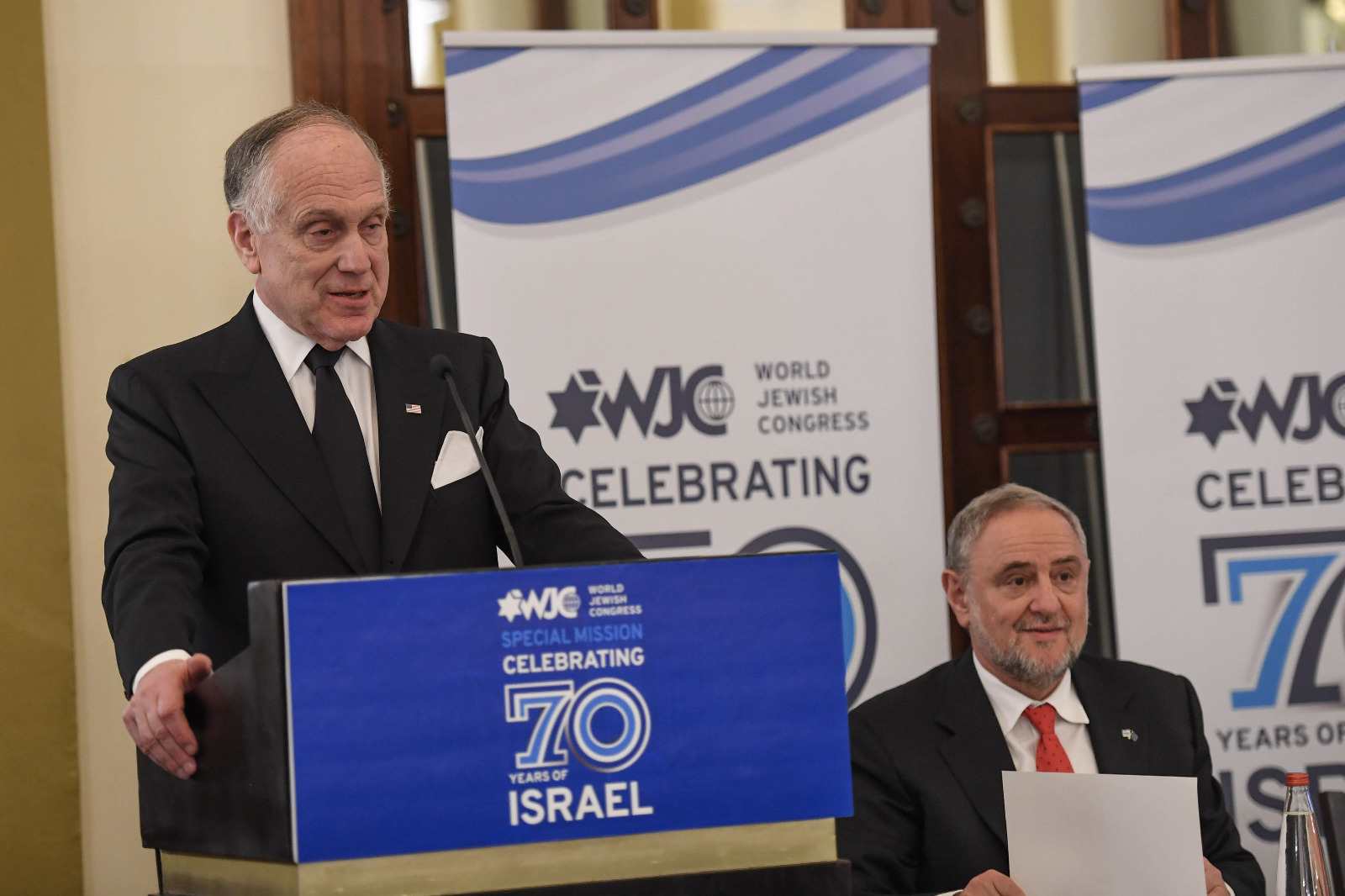 In his opening remarks to the WJC mission on Sunday, President Lauder said: “There is only one Jewish state in the entire world, and it is here. It is our solemn duty to make sure it continues to thrive forever. I am not an Israeli citizen, but Israel is my country, too. It is my second home, and like you, Israel is a large part of my Jewish identity. I believe all Jews everywhere are connected to Israel through our hearts, and that is a bond that is unbreakable.”

Senior Israeli officials including Transportation and Intelligence Minister Israel Katz, Director General of the Prime Minister’s Office Eli Groner, and Opposition Leader Isaac “Bougie” Herzog addressed the delegation on a range of topics aimed at deepening participants’ understanding of critical issues facing Israel today. Minister of the Diaspora Nafatali Bennet was honored as a keynote speaker at the official delegation dinner, during which he underscored the importance of the relationship between Diaspora Jewry and the State of Israel, and said: “All Jews need to take care of each other... I’m often asked by Jews who come over to Israel, how can I help? My answer is, focus on your community. Reach out, open up the synagogues, do outreach, support the Jews in your neighborhood, in your city, get them connected.”


The discussion on the state of relations between Jewish communities in the Diaspora and the State of Israel continued into the second day of the mission, with a panel session led by Dan Meridor, president of the Israel Council on Foreign Relations, which operates under the auspices of the World Jewish Congress, with the participation of Mossad Chief Ephraim Halevy, President of the Board of Deputies of British Jews Jonathan Arkush, and former MK Einat Wilf.

The delegates were treated to a special tour of the Western Wall and an in-depth discussion on this history of the site, where they then sat with Minister of Jerusalem Affairs Ze’ev Elkin for a lunch meeting.

In addition to Lauder, the mission was hosted by WJC CEO and Executive Vice President Robert Singer, and WJC-Israel Chairman Gad Ariely.

Lauder tells Global Forum: 'We must stand up to anti-Semites and outnumber them'

In his address Monday evening to the MFA's global forum, Lauder emphasized the need to always stand up against anti-Semites even in the most difficult of times: “We will never wipe out anti-Semitism. But when you stand up to anti-Semitism… anti-Semites back down.” 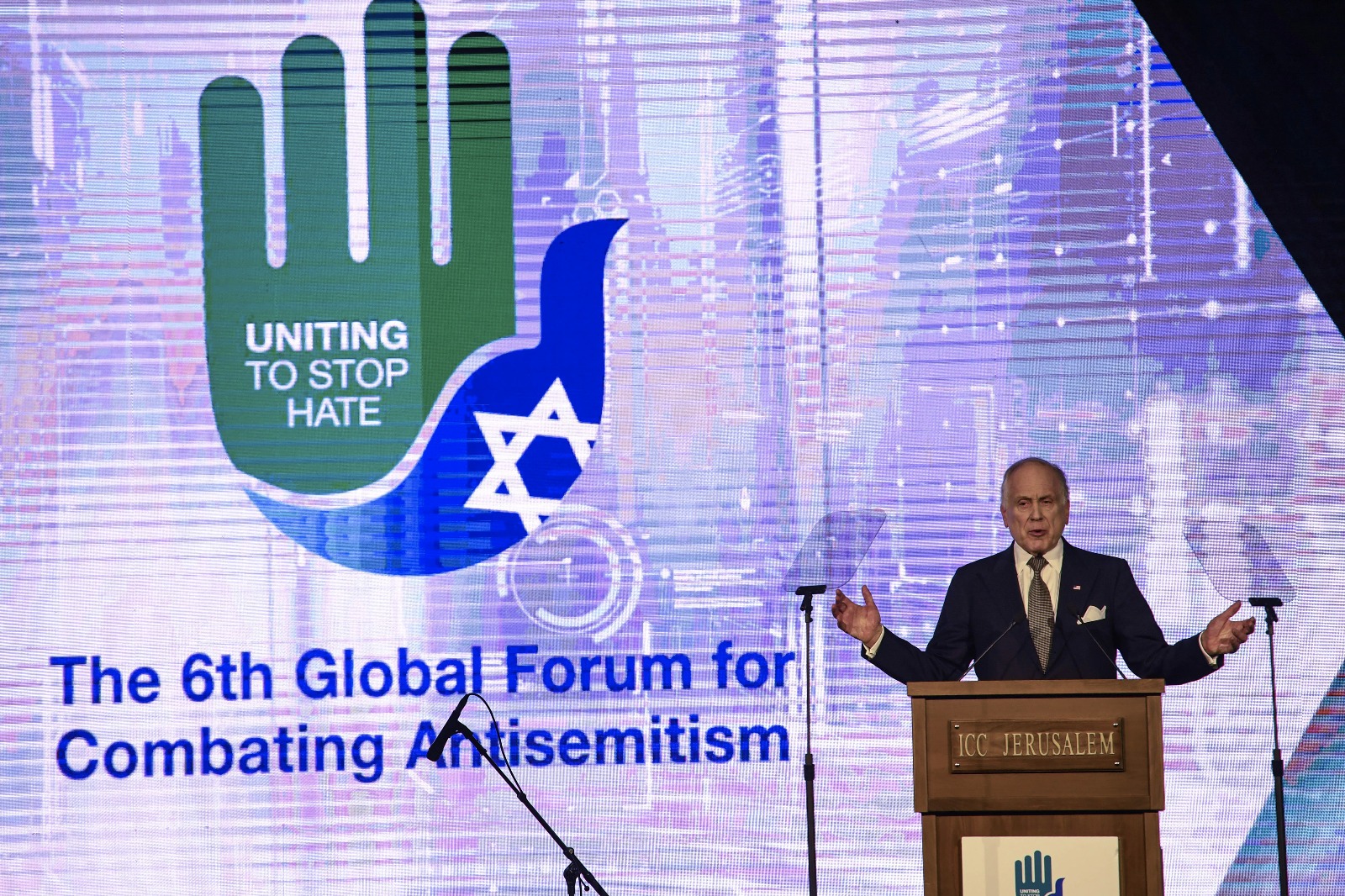 Lauder raised to the forum his intervention in recent months to try to halt neo-Nazi marches in Sweden and Bulgaria, and asserted the need to be proactive in fighting such manifestations. The WJC has decided, he said, “that for every march of 3,000 or 4,000 anti-Semites, we will stage counter marches of 50 or 100,000 students and young people who support Jews everywhere.Let the world see this. Let them know the difference in numbers and let them see the difference."

Lauder also stressed the importance of instilling a strong Jewish identity in children as a tool for fighting anti-Semitism, drawing on his own experiences in recent decades developing schools across Eastern Europe and the relative decline in anti-Semitism in that region compared to the increase in Western Europe of late. “I believe Israel has no greater supporters than the young Jewish boys and girls in Eastern Europe. If we can bring this pride to Jewish children everywhere, then that is how we will defeat anti-Semitism. That is how we will win. And we will win on our terms, not theirs.”