MOSCOW - World Jewish Congress President Ronald S. Lauder on Tuesday thanked Russia for its efforts to crack down on anti-Semitism and make Jews feel welcome in the country, after a long history of hostility and hardship. “Right now we are witnessing one of the most stunning changes in Russia’s long history,” Lauder said, speaking at the first Moscow International Conference on Combating Anti-Semitism. 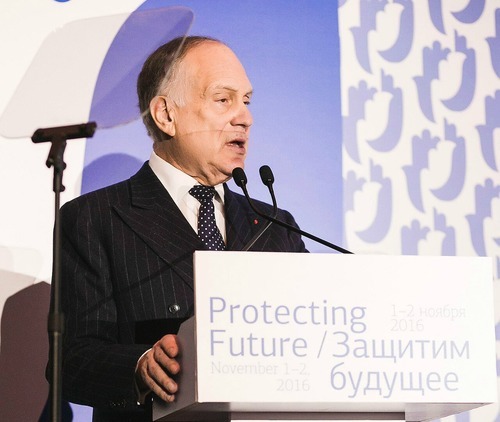 “At a time when global terrorism singles out Jews around the world, at a time when we see the impact of intolerance and hate on every continent, here in Russia, the Jewish community is thriving. Jewish kindergartens and Jewish schools are filled to capacity, synagogues are crowded on Shabbat. But Jews in Western Europe are seriously thinking of leaving,” Lauder said.

“President [Vladimir] Putin has made Russia a country where Jews are welcome. And that’s not just a good thing for Jews. It is good for Russia as well,” Lauder said. “It is because of this unprecedented change that the World Jewish Congress looks to continue to work with Russia. We want to be able to count on Russia as a solid friend.”

“However, just two weeks ago, at the United Nations, UNESCO erased thousands of years of Jewish history from Jerusalem. Unbelievably, they renamed the Temple Mount, the same temple built by King Solomon, solely by its Muslim name. I was even more surprised, and frankly disappointed, that Russia supported this resolution, a resolution that helps no-one. That’s like trying to deny any Russian connection to St. Basil’s. That’s ridiculous,” Lauder said.

“When people blame Israel for all the wrongs in the world, it is important to remember one of history’s most crucial lessons: When governments go after Jews first, it never stops with the Jews,” Lauder said. “As our world become more complex and more dangerous, we hope that we will always be able to count on Russia.”