The Israel Council on Foreign Relations (ICFR), together with the World Jewish Congress-Israel, last week hosted Angel Tîlvăr, minister in charge of Romanians living abroad, who was on an official visit to Israel. 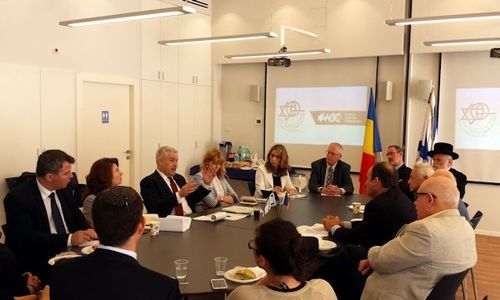 Tîlvăr presented an overview of his work at the ministry and briefed the participants on Romania's Diaspora communities, as well as on Romania's efforts to help enable them to preserve their language and culture. The minister was also able to learn firsthand about some of the concerns of Jews of Romanian origin living in Israel, including issues connected with the restitution of Holocaust-era property and the preservation of Jewish heritage sites in Romania.

The meeting was chaired by ICFR Director Laurence  Weinbaum, who spoke about the role of Romanian-born Jews in Israel as a bridge between the two countries. The gathering was attended by Sam Grundwerg, director-general of WJC-Israel, as well as by senior representatives of other organizations, including the World Jewish Restitution Organization. Other prominent Israelis of Romanian origin also took part, including former Knesset member Shmuel Halpert and Yosef Govrin, an ICFR board mmber and former Israeli ambassador to Romania.

The Minister was accompanied by a delegation from Romania as well as by Romania's Ambassador to Israel, H.E. Andreea Păstârnac. She was praised for her recent interview on Israeli TV on Yom HaShoah, during which she discussed her country's role in the wartime destruction of Romanian Jewry.