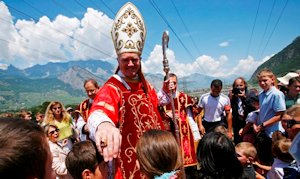 The Vatican has reiterated its commitment to dialogue with the Jews after the Bishop Bernard Fellay, the Swiss head of the traditionalist Catholic splinter group Society of St. Pius X (SSPX), called them “enemies of the Church.” Jewish leaders' support of the Second Vatican Council showed “that Vatican II is their thing, not the church's." At the Second Vatican Council during the 1960s, the Catholic Church passed a number of reforms and redefined its relationship with other confessions and religions, including Judaism. The SSPX rejects the reforms of the council.

Federico Lombardi, the Vatican’s spokesman, said that it was “meaningless” and “unacceptable” to label Jews as “enemies” of the Catholic Church. “Both Pope Benedict XVI and his predecessor John Paul II personally engaged in dialogue with Jews,” he said in a statement.

In a speech in New Hamburg, Ontario on 28 December 2012 and posted on 'Youtube', Fellay said that “the enemies of the Church: the Jews, the Masons, the modernists” were opposing the group’s reconciliation with the church.

Benedict XVI launched a series of doctrinal discussions with the SSPX in 2009, lifting the excommunications imposed on its four bishops by his predecessor John Paul II, and expressing his hopes they would return to full communion with the church. However, shortly after Benedict lifted the excommunications, it emerged that one of them, Richard Williamson, had denied the Holocaust in an interview with Swedish television recorded in Germany. 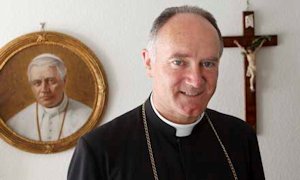 In 2011, the Vatican gave SSPX leaders a "doctrinal preamble" to sign that outlines principles and criteria necessary to guarantee fidelity to the church and its teaching; the Vatican said the SSPX leaders would have to sign it to move toward full reconciliation. However, Fellay claimed that he repeatedly told the Vatican that the contents of the preamble –particularly acceptance of the modern Mass and the council as expressed in the Catechism of the Catholic Church – were unacceptable.

In a statement, the American branch of the SSPX dismissed the “false accusations of anti-Semitism or hate speech” made against the group. It said the SSPX leader used the word “enemies” as a “religious concept,” referring to “any group or religious sect which opposes the mission of the Catholic Church and her efforts to fulfill it: the salvation of souls.”

According to Fellay, the retired Colombian Cardinal Dario Castrillon Hoyos, then-president of the Pontifical Commission Ecclesia Dei, the office responsible for relations with traditionalist Catholics, had told him in March 2009 that the society would be formally recognized. When the bishop asked how that could be possible when recognition hinged on accepting the teachings of Vatican II, he said the cardinal had replied that such a requirement was only "political" and "administrative" and that, "by the way, that is not what the Pope thinks."