A draft resolution on Palestinian statehood on Tuesday did not garner sufficient support in the United Nations Security Council. 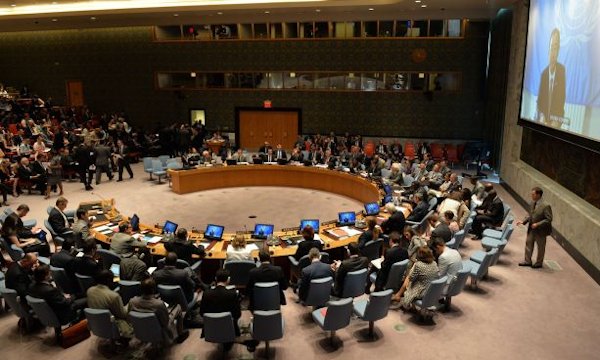 Eight countries voted in favor, five abstained and two voted against the motion, including the United States, which is one of the five veto powers on the council. Nine votes would have been necessary to carry the motion.

Security Council member Jordan had requested the vote on a draft resolution that would have set a 12-month deadline to reach a final peace deal with Israel and paves the way to a Palestinian state.

The vote capped a three-month campaign by the Palestinians at the United Nations to win support for a resolution that sets a timeframe for ending Israel's occupation of the West Bank and eastern Jerusalem. The resolution called for a full Israeli withdrawal from the Palestinian territories to be completed no later than the end of 2017.

On Monday, the Palestinians presented changes to the text, toughening up language on Jerusalem as the capital of a Palestinian state and demanding an end to Jewish settlement building. The United States again rejected the measure, arguing that it would bind the parties to a strict timeframe to reach an agreement. Washington reiterated its opposition on Tuesday after US Secretary of State John Kerry made a round of telephone calls, speaking to 13 foreign ministers to explain the US position.

WJC applauds US and Australia’s opposition to resolution

The World Jewish Congress - United States applauded the prevention of the US, Australia, and five other countries of the passage of the resolution. Rabbi Joel Meyers, chairman of the World Jewish Congress - United States, said: “ It is vitally important that this kind of resolution supporting unilateral achievement of Palestinian independence be opposed by the international community. A genuine and lasting peace cannot be imposed on the Middle East by circumventing UN mandated direct negotiations between Israel and the Palestinians. An imposed peace would not last. Only by returning in good faith to the peace table and carefully forging an agreement between the parties can a true peace be formed.

"The passage of a UN resolution such as the one proposed by the Security Council would in truth make it harder for direct talks to take place, and therefore would only undermine the prospects for peace. While the Palestinians refuse to negotiate, it is unacceptable for the international community to agree to Palestinian statehood. The absence of a peace process can in no way justify the unilateral declaration of independence.”

“We commend the United States and Australia for voting against the proposed resolution in the Security Council, and those countries that abstained on this vote. We urge the international community to heed the strong message that unilateral Palestinian efforts to obtain statehood while avoiding direct talks with Israel is unacceptable,” said Meyers.

Countries that abstained were the UK, Lithuania, Rwanda, Nigeria and South Korea. The countries that voted for the resolution were France, Russia, China, Jordan, Chad, Luxembourg, Argentina and Chile.