Madrid Jewish community head: It doesn’t matter how big or small you are, it’s all about your attitude 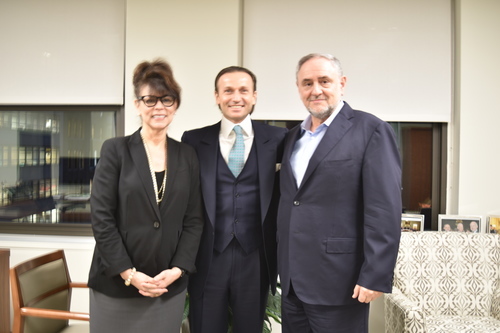 Hatchwell, a businessman by profession, has served as president of Comunidad Judia de Madrid since 2011. In his address to the New York gathering, Hatchwell discussed Jewish life in Spain in general, and anti-Semitic and anti-Israel sentiments there in particular.

“Spain is suffering from anti-Semitism, like other European countries. In every country, the disease is mutated. Every country has its own peculiarities,” Hatchwell said. He added that much of the anti-Semitism stemmed from the perceptions conveyed in the media. “In countries that don’t have a lot of diversity – and Spain was like that for a long time – there is no natural mechanism for looking at the other.

In Spain, Hatchwell said, the government was what he called “pro-Israel, in the Spanish way,” meaning that even in its support, it was largely critical of Israeli settlements and condemned what it referred to as Israel’s disproportionate responses to Palestinian violence.

The role of the community leadership, Hatchwell said, is “to make sure that Jewish life in Spain thrives.” Like many small communities, he said, the Madrid Jewish community “is small, but punches above its weight.”

The community stands up against injustices, often with great success, Hatchwell said. Specific examples include its response to the Rototom music festival’s decision to ban American-Jewish singer Matisyahu as part of its boycott of Israel policy. The community was heavily involved in exerting and enlisting pressure over the decision, and even seeking alternatives to ensure that the singer could still perform in Spain. The community is currently pursuing a lawsuit against 8 of the individuals involved in the decision ban.

“It doesn’t matter how big or small you are, it’s all about your attitude,” Hatchwell said.