World Jewish Congress President Ronald S. Lauder on Friday condemned the statement of President Rodrigo Duterte of the Philippines praising Nazi dictator Adolf Hitler and saying that he would be happy to slaughter drug addicts in his country just as Hitler slaughtered the Jews. 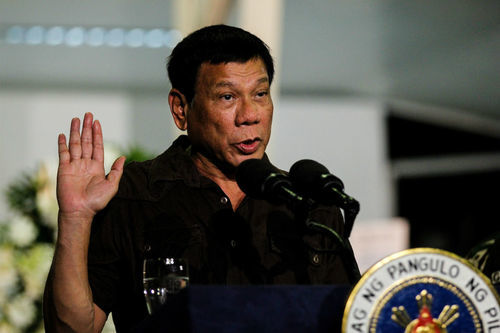 “These statements are revolting, and President Duterte must retract them and apologize,” Lauder said in Jerusalem, where he was attending the funeral of former Israeli President Shimon Peres.

Ronald S. Lauder added: “We just marked the 75th anniversary of Babi Yar, the massacre of more than 33,000 Jews in Ukraine by Nazi Germany, in a mere two days. Now, the elected leader of the Philippines openly calls for the mass murder of people who are addicted to drugs.

"Drug abuse is a serious issue. But what President Duterte said is not only profoundly inhumane, but it demonstrates an appalling disrespect for human life that is truly heart-breaking for the democratically elected leader of a great country,” declared Lauder.

Duterte made the remarks in the city of Davao, where he previously served as mayor and implemented a tough anti-crime policy. He told reporters he had been "portrayed to be some cousin of Hitler" by his critics.

"Hitler massacred three million Jews, now, there is three million drug addicts. I'd be happy to slaughter them," Duterte said, adding: "At least Germany had Hitler. The Philippines wouldn't." He said he would like to "finish the problem of my country and save the next generation".