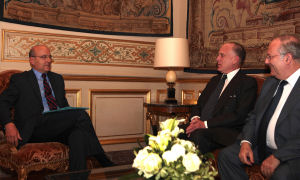 The heads of the World Jewish Congress and the French Jewish community organization CRIF, Ronald S. Lauder and Richard Prasquier, met with French Foreign Minister Alain Juppé to discuss the Palestinian gambit for recognition of a unilaterally declared state by the United Nations in September. WJC Deputy Secretary-General Maram Stern also attended the meeting at the Quai d'Orsay in Paris.

The Jewish leaders voiced concerns regarding the upcoming UN General Assembly in New York where the Palestinian Authority is expected to present a plan for the unilateral recognition of a Palestinian state by the world body. "This Palestinian unilateralism could derail the peace process," WJC President Lauder stressed.

Juppé emphasized that both he and President Nicolas Sarkozy were friends of the State of Israel and that Israel's security was not negotiable. However, he did not say how France will vote if the issue comes before the United Nations, where it is one of the five permanent members of the Security Council.