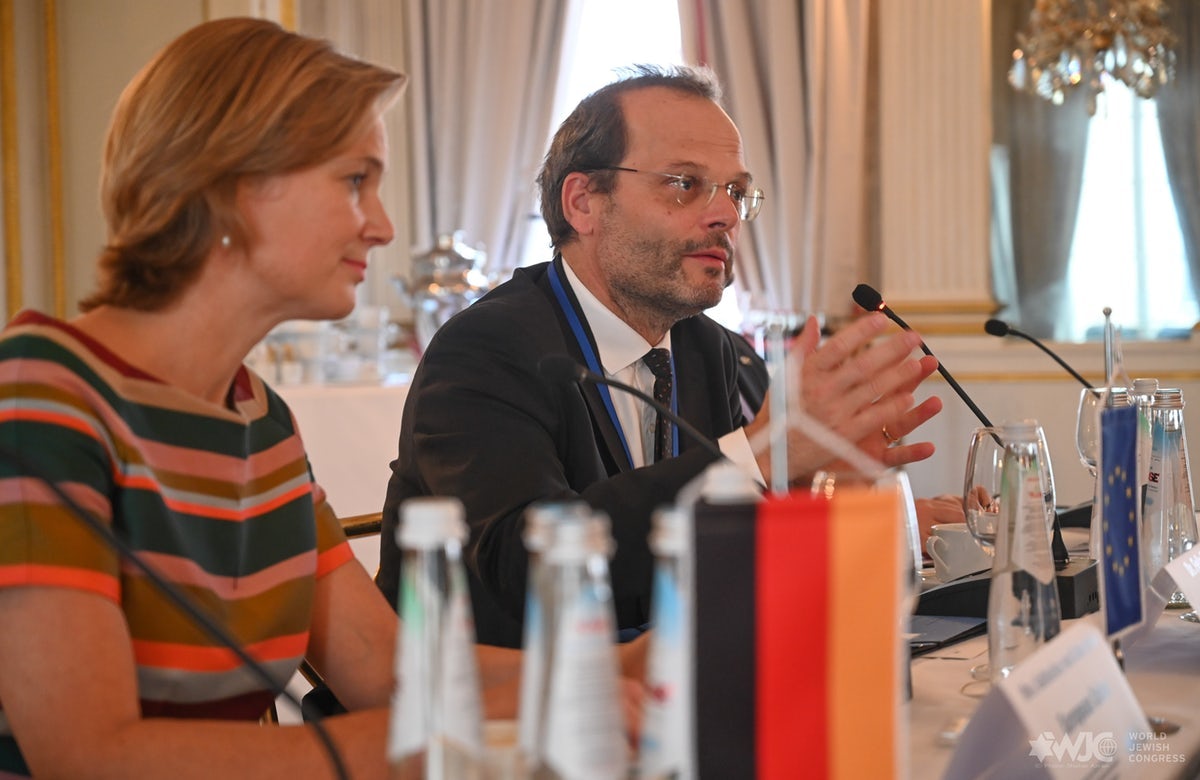 The German city of Bremen has been debating for some time whether to appoint a commissioner on combating antisemitism and promoting Jewish life, a discussion which grew ever more relevant following the attack in Halle in October 2019.

In response to the brutal Yom Kippur attack, the president of Bremen’s municipal parliament (of the Christian Democratic Union), Frank Imhoff, declared his support for creating such a position, but was met with pushback from opposing parliamentary groups. In the end, all parliamentary groups - including the CDU - decided against the establishment of this office and ruled instead to create a permanent forum promoting Jewish life and its visibility in Bremen.

In an interview with Weser-Kurier, Germany’s Commissioner for Jewish Life and the Fight against Antisemitism Felix Klein, called on the Bremen municipality to reconsider and appoint a local commissioner tasked with overseeing efforts to combat antisemitism and promoting Jewish life.

Mr. Klein, you are visiting Bremen on Monday. What brings you to Hanseatic City?

I would like to encourage Bremen's politicians and the Bremen Jewish community to  appoint a representative overseeing  the fight against antisemitism. I have followed the debate  in Bremen and know that a different solution was favored, but I would like to point out once again the advantages of appointing a commissioner. However, appointing such a commissioner  would only make sense if there is cross-party consensus and if the Jewish community would support it.

Why is a commissioner useful from your point of view?

Fifteen of 16 federal states have established such an office or intend to do so. That is a good thing. The measures available in the fight against antisemitism are to a very large extent the responsibility of the state. For example, states are responsible for  training teachers how to react to antisemitism at school, training lawyers and questions of internal security. I think it is important that there is one person who coordinates all these measures across all departments. Experience in other countries has demonstrated  that a representative can also initiate important reports  and discussions in cooperation with the Jewish community, associations and state politics.

There is a federal-state commission of the antisemitism commissioners. Bremen is represented there. Why should it be a local commissioner?
A commissioner can carry decisions of the commission to departments of the Bremen state government with the necessary legitimacy.

From the perspective of the Jewish community in Bremen - a city of short distances - an intermediary is not necessary. All factions in the local parliament have chosen a Bremen way, a "Forum of Friends of the Jewish Community," which brings together actors from politics, society, business and the media. Isn't this exactly the social anchoring that the topic of antisemitism needs?

I very much welcome the forum. I think it is an excellent initiative. I would also like to find out how the details of it are being implemented in Bremen. This structure, which is unique in Germany, could also be proposed to other federal states as an example of best practice. But I see it as a supplement to a commissioner. A forum discusses, but the administrative implementation of resolutions is something else.

How do you intend to prevent people in Bremen from feeling pressured or even patronized by the wish you have expressed in a friendly but clear manner?

I see my trip to Bremen more as a promotional trip. I would like to discuss, take away fears and then, of course, hope that my opinion will be heard.

So, it is important to you that a commissioner is not appointed against the will of the Jewish community?

Absolutely. Especially for the second part of the task, namely, to promote Jewish life, that is not possible without the Jewish community.

In the midst of the coronavirus crisis, antisemitic conspiracy theories about alleged Jewish puppet masters are booming in Germany. Does that worry you?

I'm very worried. Right-wing extremists in particular are now trying to mobilize with conspiracy myths - they are not theories, but crude explanatory patterns. In times of crisis such irrational patterns of thought are successful. They aim directly at destroying our social cohesion. Antisemitic chains of argumentation are deeply rooted in our cultural history, which is why we must pay particular attention to them and clearly oppose them.

There have been reports in Berlin of people wearing yellow stars with the inscription "unvaccinated." Whose failure is it when people, 75 years after the end of the Second World War, such symbols are still used?

This shows the brutalization to which the Internet and social media have contributed. I believe that we in Germany are well positioned with our culture of remembrance. But something like this shows that it is still not enough. Times of economic or social crisis have always been times in which racism and antisemitism have been able to flourish.

Which precautionary concepts has  the Federal Government taken?

There are concepts for the prevention of extremism. The Cabinet Committee on the Fight Against Right-Wing Extremism and Racism, which has now been set up, is intended, among other things, to shed light on these preventive concepts, for example as part of the federal "Living Democracy" program, and to see whether we are well enough positioned. The federal government wants to promote projects in the long term so that the players no longer have to shuffle from year to year. At the same time, we are sharpening criminal law. In the future, antisemitic motives in criminal offences will be assessed by courts in a more stringent manner.

Are special concepts needed in crises?

Measures must be strengthened in times of crisis, but the instruments are the same: Enlightenment and interaction.

For some time now there has been an increase in right-wing extremist terror, whose perpetrators have radicalized themselves on the net, streaming their attacks live. What must be done about this?

The attacks in Halle and Hanau have shown how inflammable and deadly conspiracy myths can seem. I expect decisive action in the fight against antisemitism from the federal government's package of measures against hate and incitement on the internet. Operators of internet platforms would then no longer only have to delete hate content, but would also be obliged to pass on the authors' data to the authorities. This puts us in a good position compared to others in the world, but we must use the German EU Council Presidency to find European strategies and instruments against antisemitism.

What exactly are you thinking about?
All European decisions must be reviewed in terms of their impact on antisemitism and Jewish life. Similar to climate protection, I would like the Heads of State and Government to adopt a passage at their summit in December that says exactly that.

Does the second step require global agreements, especially with regards to the USA?
That would of course be the best thing. But that is very difficult, on the one hand because of the legislation on companies and on the other because of the broad freedom of expression in the US Constitution.