The executive director of one of the world’s top human rights organizations has posted a tweet linking to an article written by a Palestinian writer that calls Zionism and White Supremacism 'birds of a feather.' 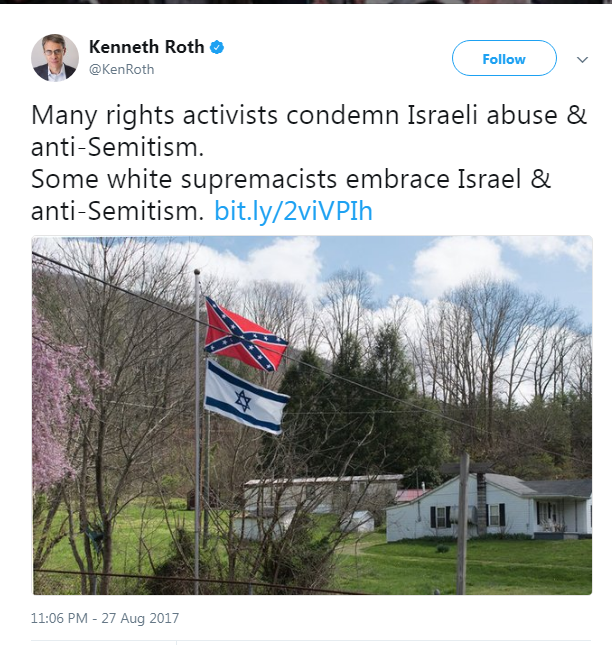 Human Rights Watch director Kenneth Roth on Sunday posted a link to the article written by BDS activist Nada Elia. "White supremacy and Zionism are two of a kind, with both modelled on ethnic exclusion,” Elia wrote, referencing the recent rallies by white supremacists in the United States. "Therefore, if one opposes exclusion, and the desire for a racially or religiously 'pure' nation, one must oppose Zionism.”

In her article, Elia wrote that white supremacists and Zionists were "natural allies” who “represent a desire to establish and maintain a homogeneous society that posits itself as superior, more advanced, more civilised than the ‘others' who are, unfortunately, within its midst, a 'demographic threat' to be contained through border walls and stricter immigration law. American fascism, then, is holding up a mirror to Zionism.”

As opposed to American white supremacy, which calls for a purely white ethnic nation state, Zionism is a movement of Jewish self-determination in its historic homeland. Jews of all skin colors from around the world live in Israel and its Arab citizens enjoy equal rights. There is currently an Arab sitting on the Israeli Supreme Court and a Druze politician in the cabinet.

Such an equation of the two movements meets the criteria to be considered anti-Semitic according to the International Holocaust Remembrance Alliance’s working definition of anti-Semitism issued last year, which states in a clause that “denying the Jewish people their right to self-determination, e.g., by claiming that the existence of a State of Israel is a racist endeavor” could be considered anti-Semitic.