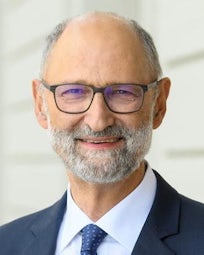 Ralph Lewin has been President of the Swiss Federation of Jewish Communities (SIG) since October 2020. The SIG is the umbrella association of 16 Jewish communities in Switzerland. In his role as President of this association, Dr. Lewin’s is one of the most important voices within the country’s Jewish communities. Together with his colleagues on the SIG’s Board of Directors, he is responsible for representing Jewish interests in Switzerland in the political, social and media domains.

Ralph Lewin, born in 1953 and raised in Basel, is a member of the Israelitische Gemeinde Basel (IGB). For several years, he was president of the Jewish student association in Basel. He completed his degree in economics and sociology with a doctorate in economics and has held various senior management and strategic leadership positions at the cantonal and national levels over the years.

After his postdoc at the University of Basel, which had a focus on economic policy, he became a research assistant at the Swiss National Bank in Zurich and then a member of the Swiss delegation at the OECD in Paris. From 1986 he served as director of the public health insurance fund in Basel and president of the association of public health insurance funds in Switzerland. Finally, in 1996, Ralph Lewin became a member of government of the canton of Basel-Stadt, responsible for the department of economic and social affairs, from 1997 to 2008. He was also a member or president, respectively, of various boards of directors and trustees, for instance Basel public transport, social care for the city of Basel and the insurance company Sympany.

After his time in the cantonal government, he was primarily active as a board member in companies and associations. In this vein he was head of the board of directors for both the Bank Cler AG (formerly Bank Coop AG) and the Jüdische Medien AG. Besides his position as SIG President, he is currently president of the public transport association «Tarifverbund Nordwestschweiz» and the Swiss shipping and port industries association SVS.

Ralph Lewin is married, has two grown-up children and lives in Basel.