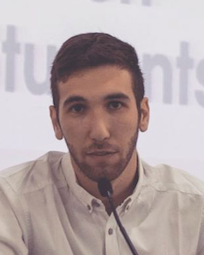 Since February 2020, Jonathan Braun has been President of the World Union of Jewish Students (WUJS), the democratic organization representing over 800’000 students across the globe. Mr. Braun is strongly engaged in empowering current and future leadership of the Jewish people, initiating local and global actions for emerging leaders. Through his position at WUJS, he shaped programs focused on establishing sustainability for youth initiatives and student unions.

Prior to his current position, Mr. Braun founded in 2015, ARIEL - Geneva Union of Jewish Students. Under his presidency, ARIEL was awarded 'The Best Developing Local Jewish Student Association' and 'The Best Local Jewish Student Association' in 2017 and 2019, respectively. In 2017, he was elected as Vice President of the European Union of Jewish Students (EUJS), where he worked with numerous organizations and student groups to develop Jewish campus life, empower students to fight discrimination, antisemitism and racism, as well as double standards targeting the State of Israel. Mr. Braun addressed the UN Human Right Council under item 7 to defend the rights of the Jewish people.

Mr. Braun who studied Neurobiology and Business, has always been passionate about Jewish values and innovation, and has volunteered across numerous organizations supporting people in need through his university life.